This post first was written a little less than a year ago! Today it is recycled for my lovely running readers! I will definitely miss running this race, as it is one of my favorite, but for anyone who is running the Philly half check out this experience before tackling it!

Because I am in New Zealand, jumping out of a plane today, here is last year’s race recap and a fun graphic!

The alarm goes off: it’s 3:30am. My body tells me no, it’s not time to wake up; as my fuzzy head is drifting back into REM, my mind kicks in. Luckily, this happens before my body has a chance to convince itself to return to my comfortable resting state. It’s the day. I’m ready. It’s time to get up and shake off the grogginess and get pumped!

This is the day that I’ve been training for since the middle of August. It’s time for the Philadelphia Half- Marathon!

My mind starts racing every which way. How will I do? Will security be intense? Which color should I wear? I wonder how I will find Ally? Will my dad get there in time? And on and on and on it runs (hehe slight pun intended).

As I munch on my dry bagel and down my last bottle of water before the race I have time to pray and reflect on what I’m feeling, where I’m feeling it in my body, and on God’s will for the day. It’s all up to him anyways on how I will do, no reason to stress it.

Next step: showering to wake me up completely and getting dressed in the most comfortable, warm but breathable running clothes I have.  Once that has been checked off my list, it’s time to put on then good old faithful running shoes. The ones that have carried me the 350 plus miles it took to train to where I am.

It’s time to hit the road (again and again for 13.1 miles….. pun intended again) and make my way over to the starting line at the Philadelphia Museum of Art.

The second I step out into the chilled darkness that is still encompassing the city at 4:50 am, I regret not adding gloves and a pull over to throw off once the race begins to my attire for the day. But nevertheless it’s time to trek on and suck it up! I know I won’t be cold a couple miles in. As the museum comes into view, the excitement spikes and the nervous bladder begins!

I locate Ally and we create the plan of attack for the next 45 minutes before the race begins. First stop, the ridiculously long lines for the porta potties.

50 porta potties prove to not be nearly enough for the 30,000 runners who all want to relieve themselves before their race. After waiting for 25 minutes in the line we make it to the front! Perfect timing! The second we step out of the bathrooms the announcer comes on the loudspeakers asking all 30,000 runners to find their respective corrals associated with their expected finish times.

Ally and I spend 15 minutes finding our grey corral, with all the other runners expecting to race a 2 hour half-marathon or a 4 hour marathon. We introduce ourselves to those around us, wish everyone luck and then listen to the announcers’ kind words of encouragement.

At 6:57 the wheeled runners are off! And thus commences the Philadelphia Marathon! Excitement and nerves grow as everyone is fidgeting to stay warm and warm their muscles for the long race ahead.

The black corral is the next to be released right at 7:00am. Followed by the green corral at 7:07. Next comes the grey, me! As we inch closer and closer to the starting line you can feel the excitement growing.

I am so ready. The grey corral has been called! Slowly as the pack of 7,000 begins to thin, jogging is possible for us in the middle of the pack. 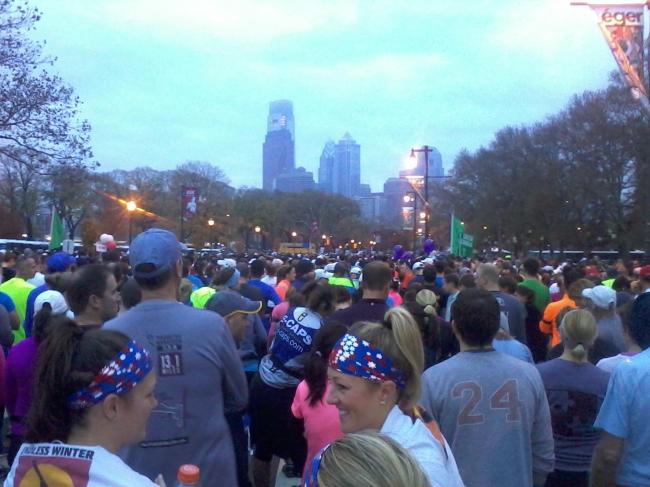 The second Ally and I step over that starting line at 7:15:32am the legs start working in that perfectly beautiful rhythm that I love!

The noise around me is exhilarating as people are screaming, cheering, and fist pumping! Our starting pace feels great! I don’t even notice I am running! But as Ally informs me we are running a 8:00 minute mile pace!

Rounding the first mile I spot a face out of the crowd that I know! My dad! As we pass I am feeling good and strong.

The entire first 5 miles feel great as we travel from the museum down through old city and along the Delaware river, into Fishtown, and up through South Street! There are people lining every part of these  5 miles dressed up in ridiculous clothes, offering ridiculous things (like snickers, beer, and mimosas), and screaming at the top of their lungs. The feeling is like none other. Pure adrenaline.

As Ally and I weave in and out of the thousands of runners around us finding their paces, we do the same. At one point she informs me we are running a 6:00 minute mile! What?! That’s crazy! But we make it through the crowd around mile 5.5.

Then we enter back into the tighter streets of Downtown Center City the pack tightens again and it’s a weaving game again. But the cheering fans packed into the city’s center make up for the extra energy I am expending by starting, stopping type motions. They (including my dad at mile 6) give me that energy!

Coming up on mile 7, the inclines begin. Whoo Chestnut Street is not fun after running a race pace on mile 7. Man the slow gradual incline is killer! But as the road flattens out we enter into my campus! I have fellow Penn students cheering me on and yelling my name! It is great!

As we round into miles 7-9 the uphills start to get to me. I am keeping up with Ally but starting to feel the burn! But I will not give up. This is what I trained for! These miles right here! I can do it! As Ally slowly started getting further and further in front of me it is getting difficult to have those spurts of sprints to catch up to her.

I’m on my own now. At mile 10 I realized this but at the same time I realized I was done with the hills! Everything else in this race was familiar. This part of the race is what I run each Saturday with my running group. This was not going to get the best of me!

I could come in strong in the next 3 miles. This was the goal. I could do this. As I begin to crave water and my mind starts taking over it gets more and more difficult to not do the runner’s countdown of how many miles and minutes I have left in this race.

There is a lady in front of me in pink. I will keep up with her. The signs are starting for the half and whole marathon splits and I know the end is near. However, it is not in sight yet. I cannot see boathouse row across the river, nor can I see the Museum coming up in the distance. It’s a battle with my mind. It’s my body against my mind, I can do this, but my mind is playing the games telling me to walk.

I will not walk. I will not listen and give into what I’m desiring. I will run. I will not stop. I will not slow. As the museum comes into view I get this small boost of energy from nowhere which led me to put aside that dumb little voice in my head saying I couldn’t do it.

As the last corner was rounded coming in under the bridge, I got this grandiose spurt of energy. I have never been able to act on the ending bit of energy as well as I did in this race. This includes all my 400 races in track as well as longer distances!

I strode so well and sprinted so well I felt completely dead and exhausted coming through the finish line. IT WAS AMAZING!

Coming through the finish line feeling like you just want to crumble. Knowing you gave it all! Coming in high fiving the Mayor of Philadelphia. It was wonderful! I love this feeling!

This was my first race ever at the end I felt I couldn’t have given more even if I had wanted to. It was beautiful!

As soon as I came through I was given a Heatsheet that I was like, why in the world would I need this, I am disgusting and sweaty and so hot, I don’t need something to keep me warm. However, about 10 minutes later once I had cooled down I was so glad I had this! I was shivering and really needed it!

Next I was given my medal from some very congratulatory volunteers. Afterwards I downed 6 cups of Gatorade, which typically I hate but after running that much I craved it madly. Then downed 2 water bottles. Not drinking during the race really makes you want it at the end!

I got my food bag, took my picture with my medal and then calculated my time while standing in line for some fruit. It was at this moment it sank in how well I had actually run.

It was so exciting to feel so accomplished, so proud of my physical limits, and enthused for life in that moment.

I was weak but strong, tired but exhilarated. It was wonderful! 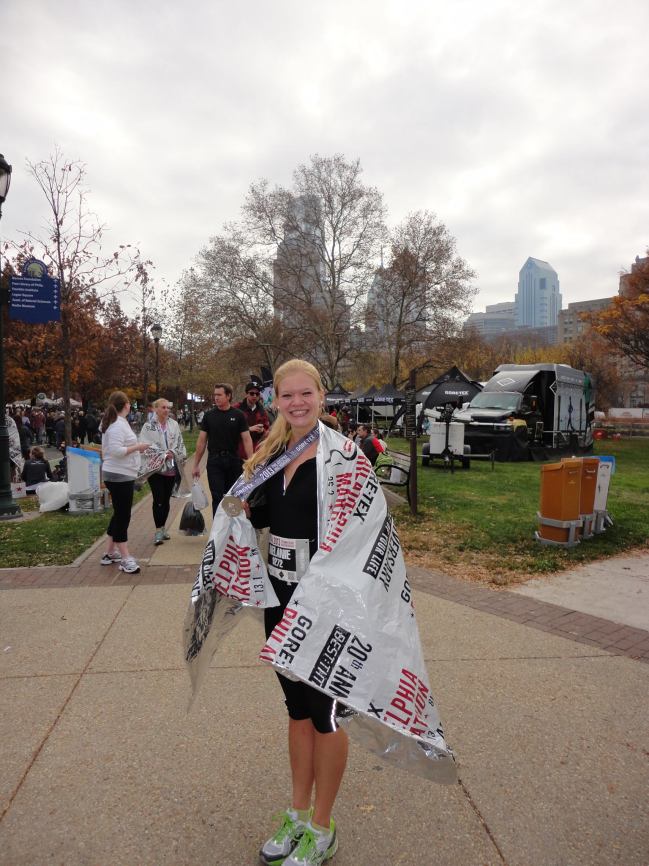 All in all Sunday=Funday=Greatday=PHILADELPHIA HALF-MARATHON!

All for the love of running!

“I can do all things through him who strengthens me” Philippians 4:13