As my good friend and running buddy Crystal knows, “I love race day!”

I only said it about 10 million times to her with mixes of jumping up and down, squealing, moaning, laughing, and lots of smiling through excitement, joy, difficulty, and pure enthusiasm! 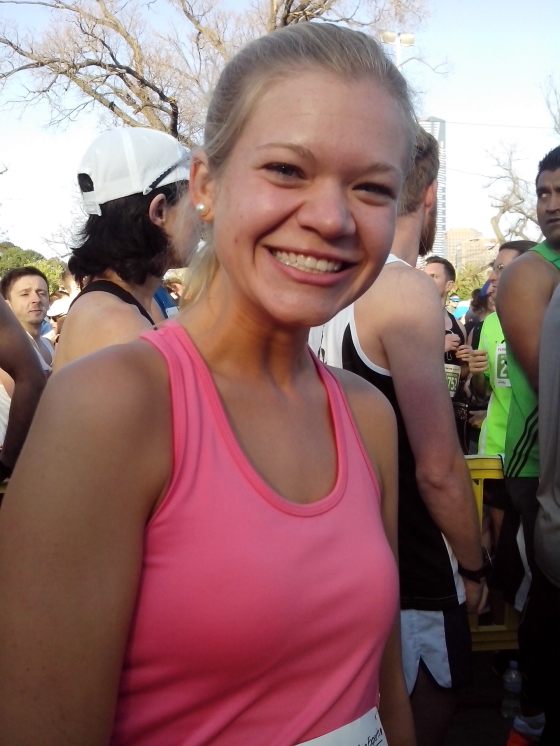 This is me with all my “loving race day” excitement!

You know it is a good friendship when you wake up pre 5am on a Sunday and run a half together all before church and a quidditch match. Life is good!

Today was my definition of a perfect Sunday!

It began with my alarm at 3:30am. To explain this to all you people out there who think I am crazy/ runners must be crazy, well partially you are correct, but there is also rhyme and reason to my madness; I run better in the afternoon than the mornings so I always wake up super early on race day to trick my body into thinking it’s the afternoon (or as the Aussies say, the arvo). So far this system has worked for me so I’m sticking to it!

Anyways after a shower and a nice stretch I ate my 4:30am bagel with salted peanut butter. Adding salt to my diet was a new addition to my nutrition plan, after doing more and more research on the matter I figured out this was a good idea. It helps you avoid cramps during the race!

Around 5:30am I did another round of stretching and ate my banana.

At 6:00am Crystal and I met and began our rather chilly and dark walk over to the Melbourne Cricket Ground where the race was to begin. 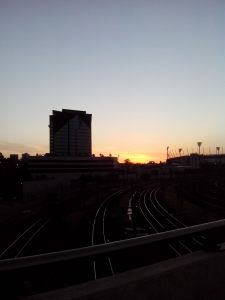 The sunrise over the MCG !

We arrived a little before 7:00am when the marathon was to begin! We were able to make it through the restroom lines before watching the beginning of the marathon! 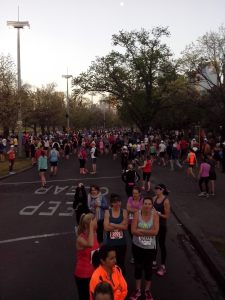 Waiting for that Marathon life!

After dropping off a bag in the MCG we made our way back down to take some pictures, stretch a bit, and use the restroom again.

Fun favorite fact about the Melbourne Marathon Festival: the bathrooms rock! There are lots of those trailers of bathrooms and not too many people to stand in line. They were super clean and well stocked with toilet paper! Much better than porta johns! (All in all, I’ve been very impressed with Australian public bathrooms no matter whether race day or not)

Okay… Done with that tangent!

I tried GU energy gel for the first time ever for this run! Definitely the flavor to go with, as my fellow running blogger and current fitness/running role model, Hungry Runner Girl informed me, Salted Caramel. SO YUM! And I truly believed it gave me energy at the beginning of the race! For my next race (and the training circuit) I am going to try one halfway through.

Anyways once we finished with all of this it was time to take our corral!!! We pushed our way into the 1:45 pace corral because as all half/marathon runners know, it is better to start off in a faster corral so you don’t need to weave and dodge for the first 15 minutes. 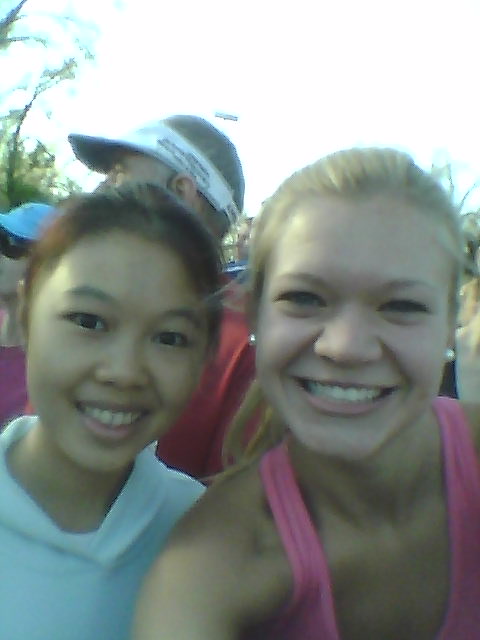 Cause every runner knows you can’t run a race without a pre-race, in corral selfie…

The excitement grew as the countdowns began on this bright, beautiful spring morning! After lots of jumping up and down exclaiming how much “I loved race day!” the gun went off!!! After a couple minutes wait, we were off! Passing the starting line we clocked into the race! 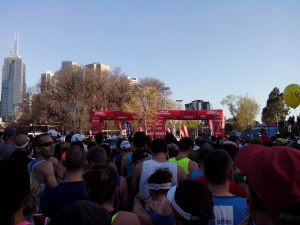 The starting line with Melbourne in the background! 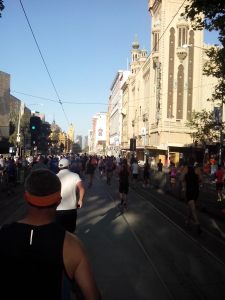 The first 40 minutes of this race flew by! We ran down St. Kilda Road, a road I was very familiar with since it is the road that leads to the beach, one of my usual running treks, and home to the first place I ever stayed in Melbourne. Even though it is nothing too special it holds a special place in my heart. And now that I’ve done the half on it, it holds an even greater place! 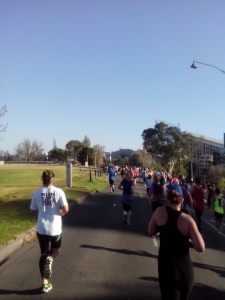 The course was really open!

Rounding around a lake the beauty of the city off to my right, this race was feeling good! We were right around 7:50 miles and I wasn’t getting tired! I was cheering everyone on, fist pumping galore, and just having a grand old time running right beside Crystal! I even decided I would try drinking some water and Hydrolyte this race! One of the first times ever! And it didn’t upset my stomach which was awesome!

I don’t know what hit around mile 7.5… I started feeling it! I don’t know if it was the GU wearing off, the heat of the day beginning, or just starting off a little fast, but my legs began the countdown… and I began mentally encouraging myself…

Once we hit 10 miles I told Crystal not to let me hold her back. My mile pace for two miles had dropped to 8:36-8:40. She kept on going about an 8:20 mile pace. I got a small boost at mile 11 and caught up to her on an incline! After the hill it started being killer again. What went from me encouraging Crystal at the beginning became her encouraging me! It was exactly what I needed and the boost helped me so much!

By now, without the end in sight (physically, mentally it was there) and not knowing exactly where the course would take me, I was just trying to finish strong. And as we ran along, I gained a little momentum but still knew by now the goal was just to finish! 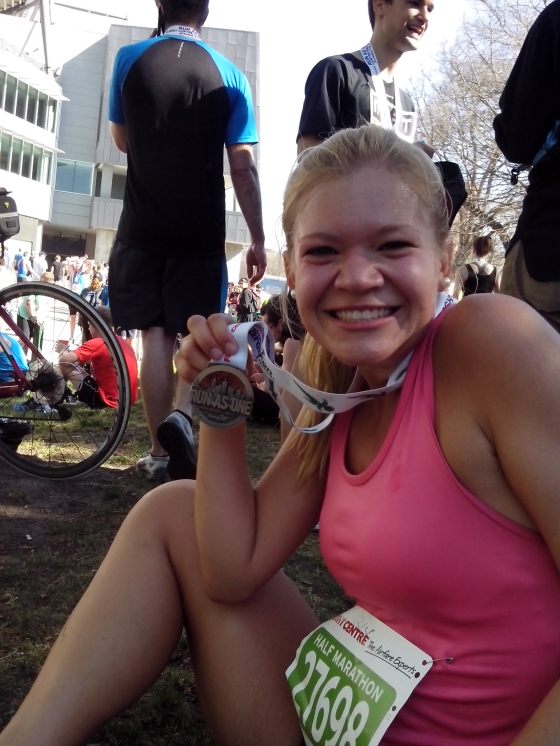 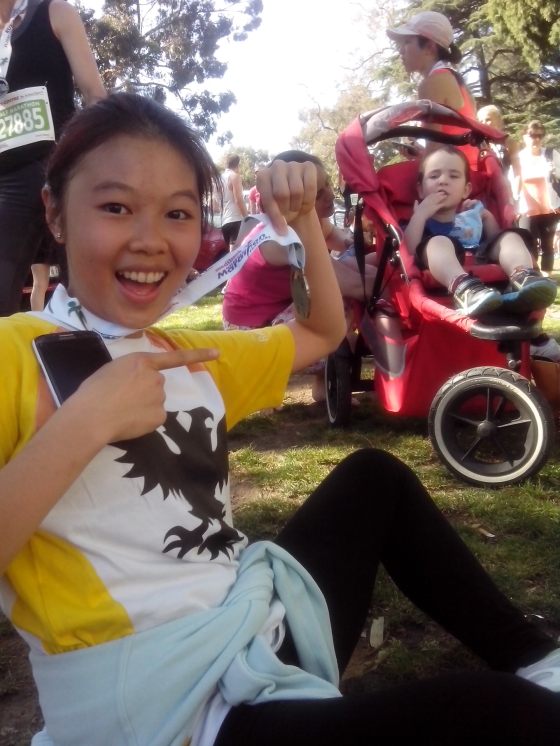 It was a truly beautiful, fairly flat race that I would 100 percent do again!!! Also it always feels good when you have only trained for about a month and have a stretch goal of 1:55 and knock 5 minutes off that time! 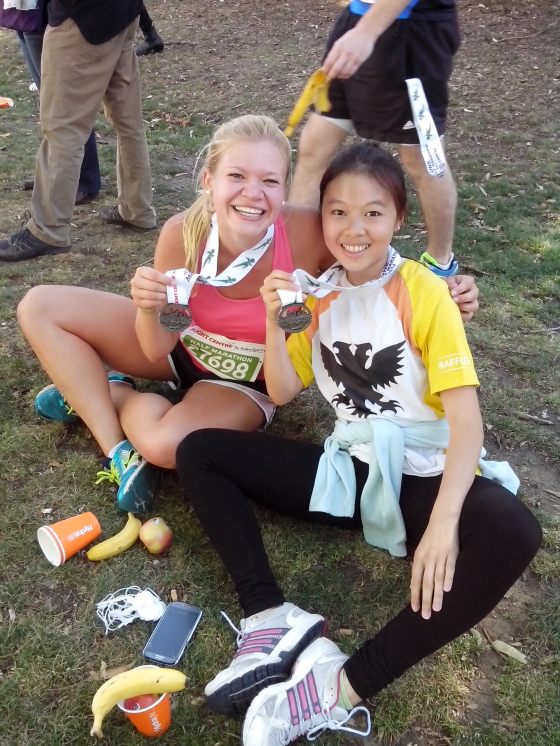 After waiting in line for water, stretching, moaning, groaning, and picking up our bag, Crystal and I walked back to the city, where she headed off for her match (cause she’s crazy and does sport after her impromptu half marathon she decided a week before she was going to run! She is truly a superstar! An amazing Christian woman, a wonderful friend, and a great runner! Crystal’s only goal for the half was to come in under 2:00… and she came in at 1:50:06!!!!!!!!!!!!!!!!!!!!!!!!!!!!!!!!!!!!!!!!!!!!!!!!!!!!!!!) and I stuck around and cheered on the marathon runners while stretching at Federation square before church began.

After a beautiful church service where I won a give away since I had my bib on still from the morning, a nice protein lunch, some time studying in the sun, listening to an outdoor concert in the quad, some productivity, a nice dinner, watching a fun show with my corridor mates, and yoga with Crystal, I sit here writing this and studying a map of Africa for a test I have this week before bed!

The Melbourne Marathon Festival is definitely a course/ race/ day not to miss!

What was your best thing you did this weekend?

Do you have any weird race day habits?

58 thoughts on “Race Recap: The Melbourne Half Marathon”