So today is all about running, makes sense right? Since this is a running lifestyle blog.

Two weeks ago I had to stop running.

I had lost the ability to breathe normally while walking, much less running. I would walk up the three flights of stairs to my room and feel so weak from lack of air in my lungs I would collapse on my bed for 10 minutes before I regained any strength. This went on for days on end. I could not lie down without a 20 minute coughing fit, I could not eat without feeling as though I couldn’t breathe, and I could not sit in class without causing a ruckus from my nose blowing and coughing.

I had begun to get sick 4 weeks before and had what I had thought was a cold that after a week of difficulty breathing through my nose finally subsided. Once it subsided, I resumed normal activity and went about my life, however not feeling 100% yet. A week later it came back and I began to wonder what was wrong. Up to this point I was still running, exercising, but just dealing with the nose blowing and cough that came with it.

On week 4 when I woke up one morning unable to walk to the bathroom less than 20 feet away without stopping to catch my breath and cough I finally realized something was really wrong. I called the doctor and went to a clinic which informed me I had a sinus infection, was prescribed an antibiotic, and filled my prescription. Day 5 on this antibiotic (my last day) rolls around and if anything I feel worse than when it started. So I called another doctor.

Hours later I had a new diagnosis of a chest infection, a new prescription for an antibiotic, and an appointment for a week later in case I wasn’t feeling better yet. Luckily this one and lots of prayer worked! After day 3 I felt like a completely different person!

So why do I share this story with you? Yes, to tell you a bit about my time abroad, this last month and a half that is, but also to explain to you how stressful it can be to have to take time off when training for a race.

I run the Melbourne Half Marathon October 12th and as the one month date approached closer and closer I began to stress that I would not be able to run it and prepare for the worst: having to get a refund or drop down to a shorter race.

I now understand how annoying injuries are to runners who are training for something! I had been so blessed that I had never have had that experience and pray that I never will!

With running being something that calms me, grounds me, refreshes me, and is something I enjoy so much, this sickness forcing me to take a week off was miserable. I felt so weak and helpless. I wasn’t able to fully relax or be completely happy. It was not a great place to be in.

However, in the midst of it, I was reminded of something, my true love for the sport of running.

This week, since I have been back, yes, I have been slow, but I have felt so good and happy on runs! I have taken every stride as a blessing and every run as a joy!

I have resumed my “garden and park tour” of Melbourne. (A personal challenge to run in every park/ garden in Melbourne while I’m here, there are over 20) And have checked off 4 more parks/ gardens and logged over 31 miles in 5 days! I have gotten to run in the forest, on pavement, on sand, on gravel, on the beach, in the park, through the city, and even in the water!

There is nothing like that feeling after a good, long run to make you feel accomplished and high on endorphins!

I thank God for my ability to run and that he has given me the gift of enjoying it! As the Philadelphia Marathon’s theme last year stated, I do it “For the love of running.” 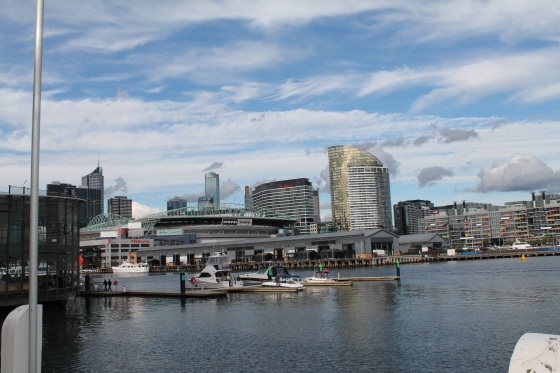 The Docklands on a beautiful 6 mile run!

St. Kilda where I had a wonderful 6 mile run with friends and ended my 13 miler today!

11 thoughts on “Running and Sickness Through the Eyes of a Runner.”